THE QUEEN AND I

Letter to Columbus from The King and Queen

FERDINAND and ELIZABETH, . . .For as much of you, Christopher Columbus, are going by our command, with some of our vessels and men, to discover and subdue some Islands and Continent in the ocean, and it is hoped that by God's assistance, some of the said Islands and Continent in the ocean will be discovered and conquered by your means and conduct, therefore it is but just and reasonable, that since you expose yourself to such danger to serve us, you should be rewarded for it. And we being willing to honor and favor you for the reasons aforesaid; Our will is, That you, Christopher Columbus, after discovering and conquering said Islands and Continent in said ocean, or any of them, shall be our Admiral of the said Islands and Continent you shall so discover and conquer; and that you be our Admiral, Viceroy, and Governor in them, and that for the future, you may call and stile yourself, D. Christopher Columbus, and that your sons and successors in the said employment, may call themselves Dons, Admirals, Viceroys, and Governors of them; and that you may exercise the office of Admiral, with the charge of Viceroy and Governor of the said Islands and Continent, which you and your Lieutenants shall conquer, and freely decide all causes, civil and criminal, appertaining to the said employment of Admiral, Viceroy, and Governor, as you shall think fit in justice, and as the Admirals of our kingdoms use to do; and that you have power to punish offender; and you and your Lieutenants exercise the employment of Admiral, Viceroy, and Governor, in all things belonging to the said offices, or any of them; and that you enjoy the perquisites and salaries belonging to the said employment, and to each of them, in the same manner as the High Admiral of our kingdoms does. And by this our letter, or a copy of it signed by a Public Notary:

We command Prince John, our most dearly beloved Son, the Infants, Dukes, Prelates, Marquises. Great Masters and Military Orders, Priors, Commanders, our Counselors, Judges, and other Officers of Justice whatsoever, belonging to our Household, Courts, and Chancery, and Constables of Castles, Strong Houses, and others, and all Corporations, Bailiffs, Governors, Judges, Commanders, Sea Officers; and the Aldermen, Common Council, Officers, and Good People of all Cities, Lands, and Places in our Kingdoms and Dominions, and in those you shall conquer and subdue, and the captains, masters, mates, and other officers and sailors, our natural subjects now being, or that shall be for the time to come, and any of them, that when you shall have discovered the said Islands and Continent in the ocean; and you, or any that shall have your commission, shall have taken the usual oath in such cases, that they for the future, look upon you as long as you shall live, and after you, your son and heir, and so from one heir to another forever, as our Admiral on our said Ocean, and Viceroy and Governor of the said Islands and Continent, by you, Christopher Columbus, discovered and conquered; and that they treat and your Lieutenants, by you appointed, for executed the employment of Admiral, Viceroy, and Governor, as such in all respects, and give you all the perquisites and other things belonging and appertaining to the said offices; and allow, and cause to be allowed you, all the honors, graces, concessions, prehaminences, prerogatives, immunities, and other things, or any of them which are due to you, by virtue of your commands of Admiral, Viceroy, and Governor, and to be observed completely, so that nothing be diminished; and that they make no objection to this, or any part of it, nor suffer it to be made; forasmuch as we from this time forward, by this our letter, bestow on you the employment of Admiral, Viceroy, and perpetual Governor forever; and we put you into possession of the said offices, and of every of them, and full power to use and exercise them, and to receive the perquisites and salaries belonging to them, or any of them, as was said above.

Concerning all which things, if it be requisite, and you shall desire it, We command our Chancellor, Notaries, and other Officers, to pass, seal, and deliver to you, our Letter of Privilege, in such form and legal manner, as you shall require or stand in need of. And that none of them presume to do any thing to the contrary, upon pain of our displeasure, and forfeiture of 30 ducats for each offense. And we command him, who shall show them this our Letter, that he summon them to appear before us at our Court, where we shall then be, within fifteen days after such summons, under the said penalty. Under which same, we also commanded any Public Notary whatsoever, that he give to him that shows it him, a certificate under his seal, that we may know how our command is obeyed.

Three days out, the mast of the ship was damaged, forcing a brief stop at the Canary Islands. On September 6th, the three vessels again weighed anchor and sailed due west. Columbus maintained this course until October 7th, when, at the suggestion of Martín Pinzón, it was altered to southwest. Meanwhile, the experienced crew grumbled about their foreign commander's failure to find his way and began to turn on Columbus, until signs appeared that they were approaching landfall. 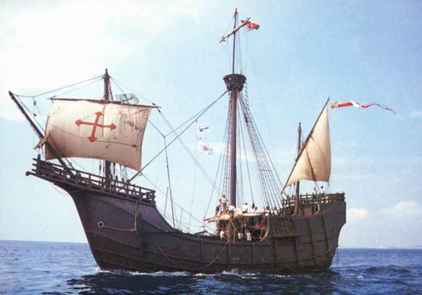 Before dawn on October 12th, land was sighted and early in the morning, the expedition landed on Guanahani, an island in the Bahamas. Before an audience of uncomprehending black islanders, Columbus claimed that, by right of conquest, their island now belonged to Spain and renamed it San Salvador ("Holy Savior"). Additional landings made during the next few weeks included the islands of Cuba, which Columbus named “Juana”, in honor of a Spanish princess, and Española, was later corrupted to “Hispanola” (now the Dominican Republic and Haiti), all believed by Columbus to be in Asian waters.

Who was the first to step foot on land?

The first to step foot on Western land was Columbus‘ navigator of the Nina.  He was an African Moor named Piedro El-Negrito who Columbus called “Peter the Little Nigger." Peter was a high commander of the expedition because he was a Moor and spoke Spanish, Latin and Arabic and served as translator for Columbus on many of his journeys. When Peter stepped foot on the island of Espanola, he was greeted by a black king who greeted him in a dialect of Aramaic, the language primarily spoken in West Africa. It is stated that Columbus was frightened to un-board his ship until he knew that the natives were not warlike.  What a hero! In fact, it is reported by his crew that Columbus never physically stepped foot on western soil.

Who did Columbus encounter when he reached the western lands?

Columbus first encountered a band of Arawak Native Americans. Columbus’ initial impression of these people were favorable. Columbus stated that these people were very docile and would make good servants. The Arawaks were very hospitable to Columbus and his crew. When Columbus noticed that the natives had gold hanging from their noses, he inquired about the tribe's wealth. Not knowing of Columbus’ intentions, the natives told Columbus of plentiful gold including a solid gold cup which was owned by the king of the tribe. The next morning, Columbus set out to the other side of the island where he encountered two villages. In his own words, Columbus said, “I could conquer the whole of them with fifty men and govern them as I please.”