The Amer Moors (Our True Identity)

You state that the Olmecs were of Mali. Doesn't that make them Moors?

Absolutely! The Olmecs were indeed Malian Moors. The Mayans were descendants of the Malian Moors and were often referred to as "Black Mexicans" or Quetzacoatl. There are ancient Mexican wall paintings that depicts these "Negroid" kings and rulers as unmistakably African. 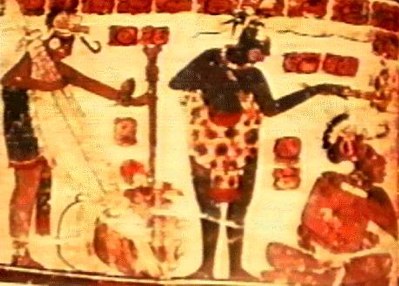 NOTICE THE BLACK MOORS ON THE WALLS OF THE MAYAN TEMPLES

These Moors were the people who built the great pyramids all over South America, Peru, Canada, Alaska, and Georgia that scattered all throughout North America along the Mississippi River and it's tributaries are found mounds built out of tons and tons of earth. The people who built them were called the Mound Builders and they were the descendants of the Malian Moor Olmecs. These Moors eventually migrated to North America from Mexico and became known as Washitaw, Yamasee and the Ben-Isma-EL tribe. The Ben-Isma-EL tribe was a collection of what is now known as Lenape, Wapanoag and Nanticoke Indians who migrated to Indiana and Illinois and referred to themselves as "Moors" even though the United States Government continued to classify them as "Negroes" in order to strip them of their Indigenous rights. 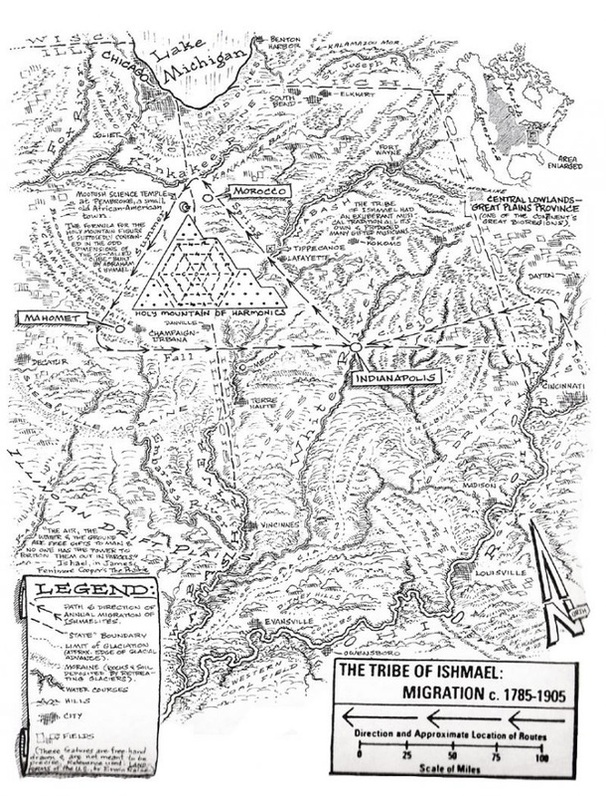 It is often not talked about, but the Moors had enslaved the Europeans before they enslaved blacks. Their women were sold like commodities into the harems and as concubines of wealthy Moors. This is the reason why the Moorish noble were for the most part bleached out, and became known as "tawny-moors", Turks and Arabs, which are no more than "fixed mulatto races". This also is the reason for the Moors in the coats of arms of noble Europeans family.

The so-called "Black Nobility" of Europe, and the Bilderberger group. The European nations paid tribute to the Moors well into the 18th century. In the book, "United States and Barbary Powers" the English, French, Dutch, Danes, and Swedes, and I may say all nations are tributary to them." David Macritchie in the book "Ancient and Modern Britons" says that the word "Blackmail" is the result of this tribute paid to the "Black Army", or "Black Oppressors" as the English referred to them.  The Moors had control of the Atlantic and the Mediterranean. This is why the Marines sing of defeating the Moors " From the halls of Montezuma (Mexico) to the shores of Tripoli", confirming in song the extent of the Moorish empire or dominions of Amexem, or Atlantis. Below is the first page of the Moroccan Treaty of 1787. It should also be noted that Shakespeare's most famous Moor, Othello, is also described as a Black African. Thomas Jefferson and Benjamin Franklin worked closely with the Moors in the Continental Congress to secure this treaty. In the Bevans collection there are over 200 letters to the Bey of Morocco from the Continental Congress. There were many Moors in the Continental Congress working with the European Masons originally taught by Moors, to form a "Novus Ordo Seclorum" [ new secular order of the ages, "E Pluribus Unum" out of many peoples and nations, one]. The Moroccan Treaty is very powerful because according to the Constitution, treaties are the "Law of the Land".

THE REAL MONTEZUMA OF THE AZTEC EMPIRE WAS NOT A WHITE MAN. HE WAS A BLACK MEXICAN MOOR!

This treaty specifically deals with Moors. The question then may arise, "How do we know that where the treaty says Moors, that so-called "Black" people of that time is being referred to"? The Moors were considered citizens or part of  "We the People" who ratified the Constitution. It says; "thus an act was passed in Massachusetts on 6th of March, 1788, forbidding any Negro not a subject of the emperor of Morocco, or a citizen of the United States, from tarrying in the Commonwealth." This for one show that those who were referred to as "Negroes" were actually Moors and that they were on the same footing or status as "State Citizens". Those who remembered that they were Moors, used the Moroccan Treaty of 1787 to secure their rights on the same footing as the state citizens without otherwise being obligated members of their "Social Equality". While those who were brainwashed into believing they were "Negroes" descendants of Africans brought here by the Europeans were unprotected by the Moroccan Treaty, as well as the articles of Confederation and the Constitution. This document says" A petition was presented to the house from sundry free Moors, subjects of the emperor of Morocco; and residents in this state, praying that in case they should commit any fault amenable to be brought to justice, that they as subjects to a prince (here in North America) in alliance with the United States of America (via the Moroccan Treaty of 1787), may be tried under the same laws as the citizens of this state would be liable to be tried, and not under the Negro Act, which was received and read." Thus you had Moors back in 1789 saying what we say now; our nationality is Moorish and not Negro, colored, black etc.." 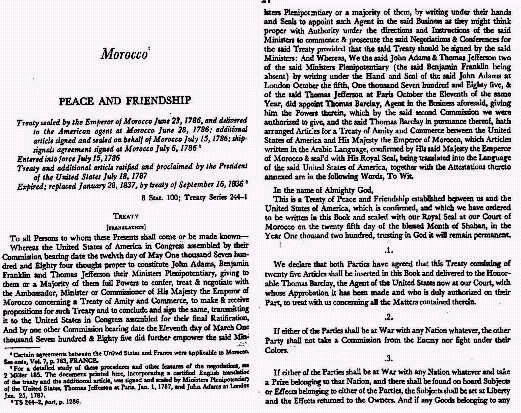 MOROCCAN TREATY WITH THE UNITED STATES - 1787 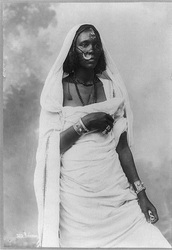 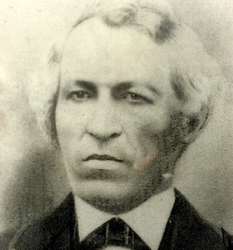