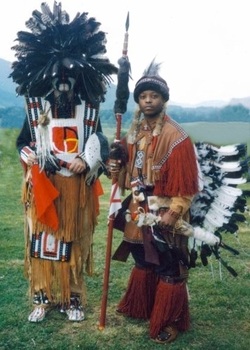 Robert Strongrivers was born Robert H. Williams. Robert was born to Elijah and Velma Williams (Seminole Creek) of Baldwin County, Alabama along the Mobile Chickasaw Delta. At a young age, Robert was told stories of his Black Indian ancestors. Robert's genealogy extends from three prominent surnames, Porter, Moore, and Williams, all descendants from the southeastern tribes of the Muskogee Nation (Black Creek, Chickasaw, Yamasee, Choctaw and Seminole with Porter also extending from slave ownership. Strongrivers' family settled in the area of Tensaw in Baldwin County, Alabama along the Tensaw River which flows along and across the Chickasaw Junction and empties into the Mobile Bay.

After receiving a small academic scholarship and placement in Who's Who Amongst American High School Students Academic list, Robert graduated from J.E.B. Stuart High School in Virginia June of 1987 with his sights set on returning to his ancestor's home of lower Alabama. Robert applied to Alabama State University and was accepted in 1998. Robert immediately was scouted by two of the University's most controversial cultural organizations, E.T.A.N.I. (Egypt Tiye Africanus Nia Imani), and DOMA (Descendants of Mother Africa). In E.T.A.N.I., Robert became a key speaker giving lectures to thousands of university students and staff on such issues as Black Sovereignty and Autonomy. He became the first member of E.T.A.N.I. to hold rank in that organization and simultaneously rank as Vice President of DOMA.

Robert continued to lecture throughout the state of Alabama on Religious Diversity and Early American Course Politics in the South. In 1992, E.T.A.N.I. led a protest in Selma Alabama after several African American children organized a sit-in against the anti Black History school curriculum. Robert, along with fellow E.T.A.N.I. members barricaded themselves in the school cafeteria for three days. This protest sparked national attention, attracted law enforcement and even members of white supremacist groups which were taken into custody by E.T.A.N.I. members and then released to the authorities. Robert was one of the motivational speakers for that event.

In December of 1992 Robert founded the organization "Broken Arrow" which focused on the African link to Native American culture. Broken Arrow was ground breaking for many blacks had an idea of Native American ancestry but lacked the actual knowledge of their ancestry. Broken Arrow was a research organization to help those discover their true roots. After graduating from Alabama State University, Robert moved to Virginia in 1993 where he took his tribal oath with tribal council principle Zadok and accepted the name of "Catwabieye" which translates as "Strong River People." In 1994, he renamed his organization Broken Arrow -  'Indigenous Peoples of America Reconciliation of Diverse Tribes and Nations.' The organization was created to mediate the racial, social and religious differences between red, black and white Native Americans and help close the gap of Native American segregation. Robert began creating the website "Lost Feather" in 1997 as a educational website for college students interested in learning true Native American history. Lost Feather is sponsored by the National Olmec American Heritage and Research Association (N.O.A.H.  A.R.C.) and has become the largest Black Native American website on the Internet. The website has been referenced by several colleges and other educational sources such as;